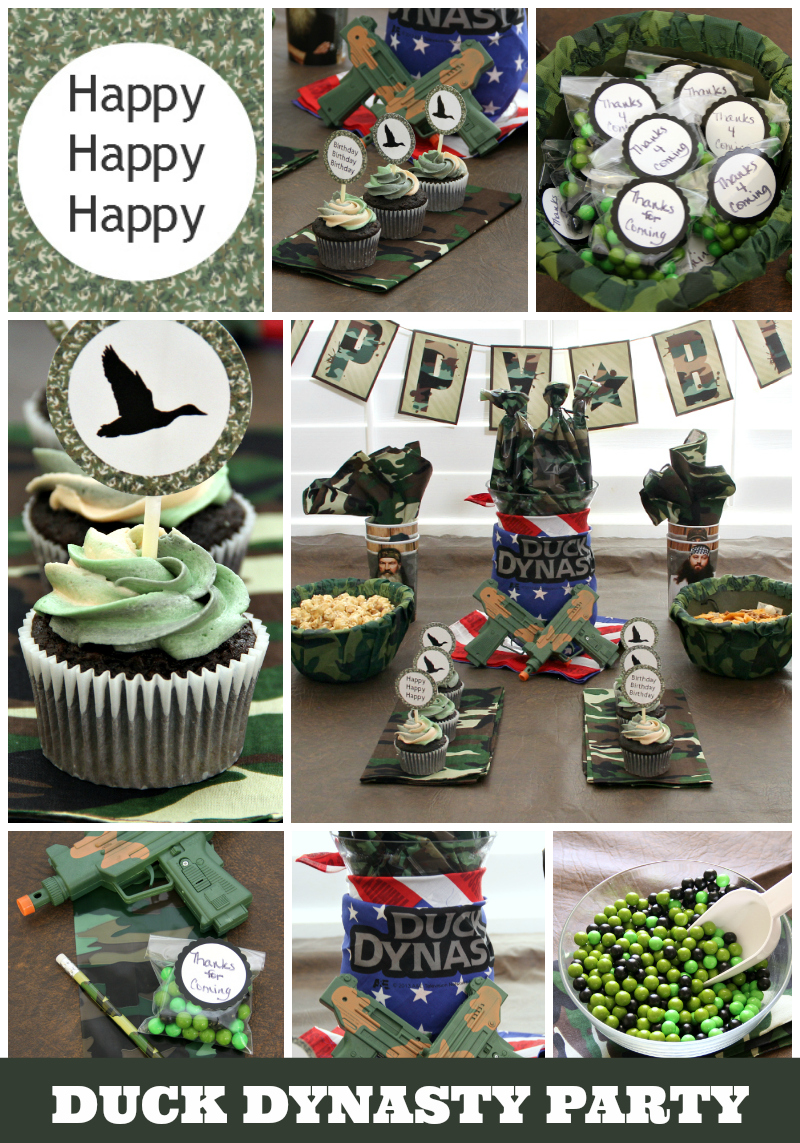 So, it’s your happy happy happy birthday! There is only one party for you….a Duck Dynasty Birthday Party. I love themed parties, but I don’t enjoy the price tag of buying a ton of logo’d items for a 2-3 party. It’s just not budget friendly. However, if you are a Duck Dynasty fan there are some great options for a birthday party that any fan will love. 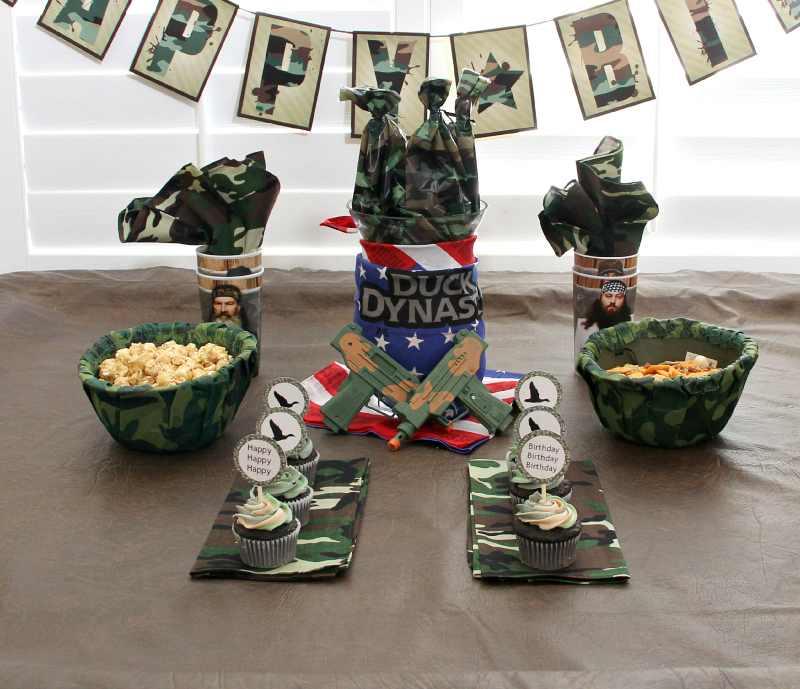 Even though the table looks a little small, it was a huge hit with everyone who attended. I used a lot of camouflaged items from the dollar store and a local party store, plus I hit up Walmart of the Duck Dynasty cups and bandanna to add in a few key pieces, while still keeping to my budget.

I sent these totally adorable invites to all the kids in my daughter’s class at school it really set the mood for the party. I’ve given you a blank one to download..just add your own text and then have them printed (4×6) as a photo at some place like Walmart’s photo center. (Note: I edited out some identifying info, so a few parts might look off.) 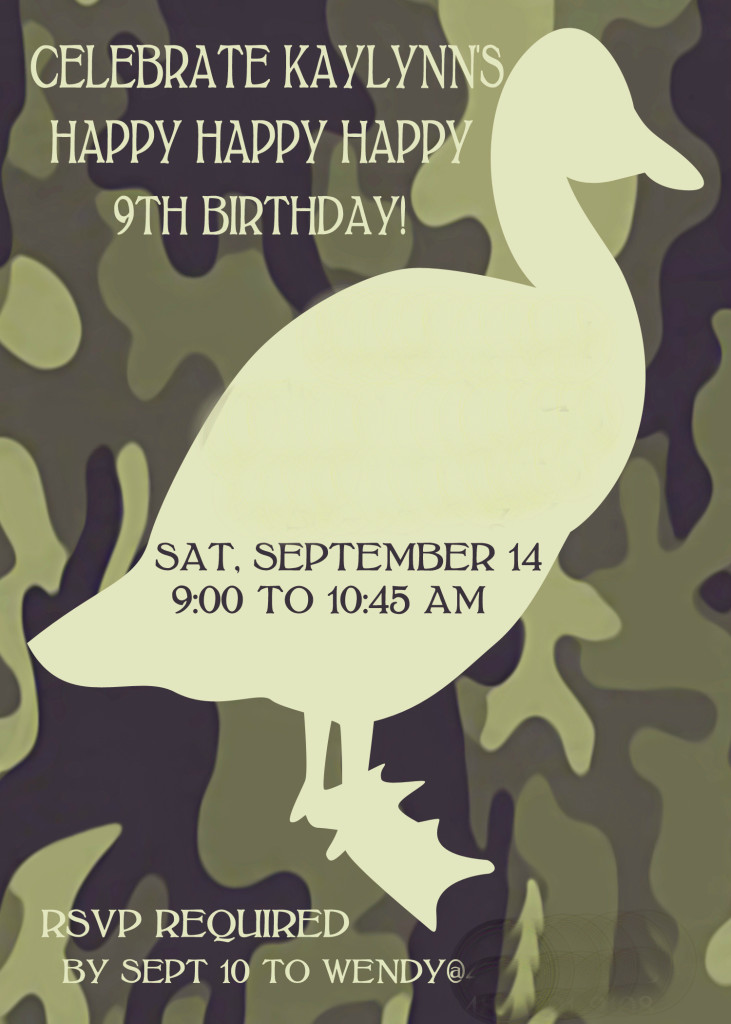 {Download a blank version by right clicking HERE! Then add your party details and print.} 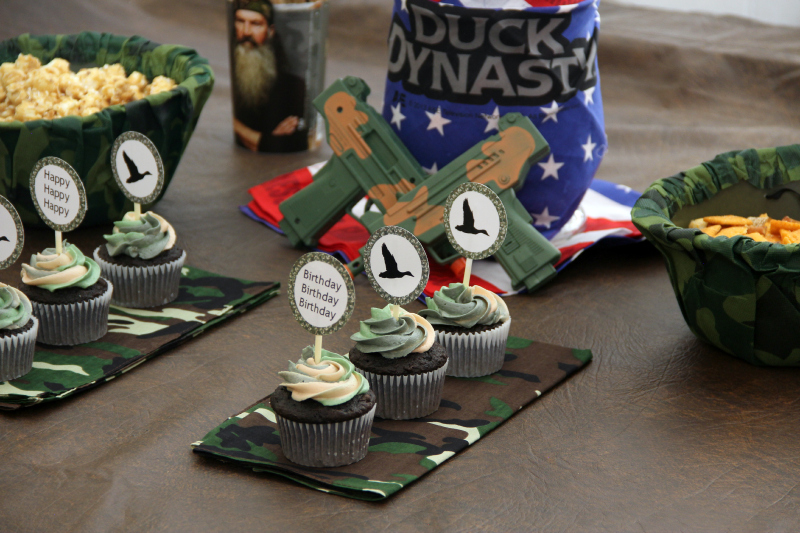 The guns are from the dollar store as were the hats, which held all the snacks and party favors. 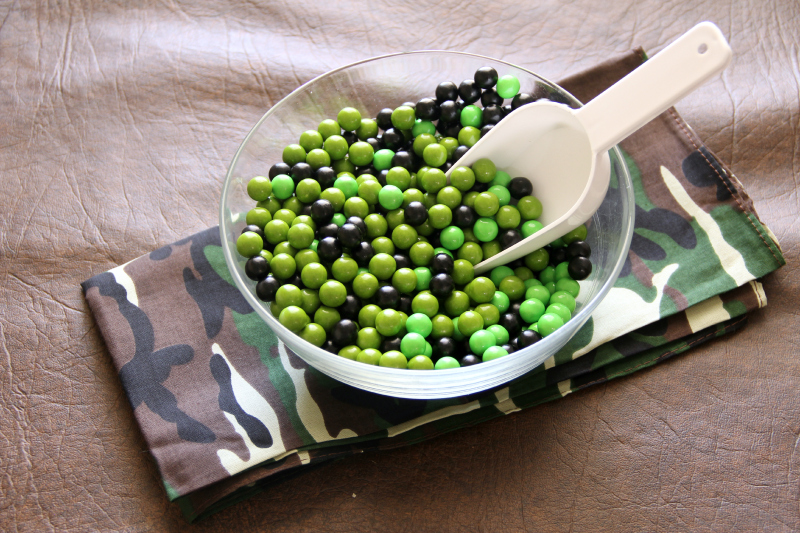 My local party store sells these candies in single colors, so I picked up two different greens and a bag of black. {I searched for a creamy color, but couldn’t find any.}  I dumped them in a bowl and scooped them into small clear baggies to create my own camo candies. 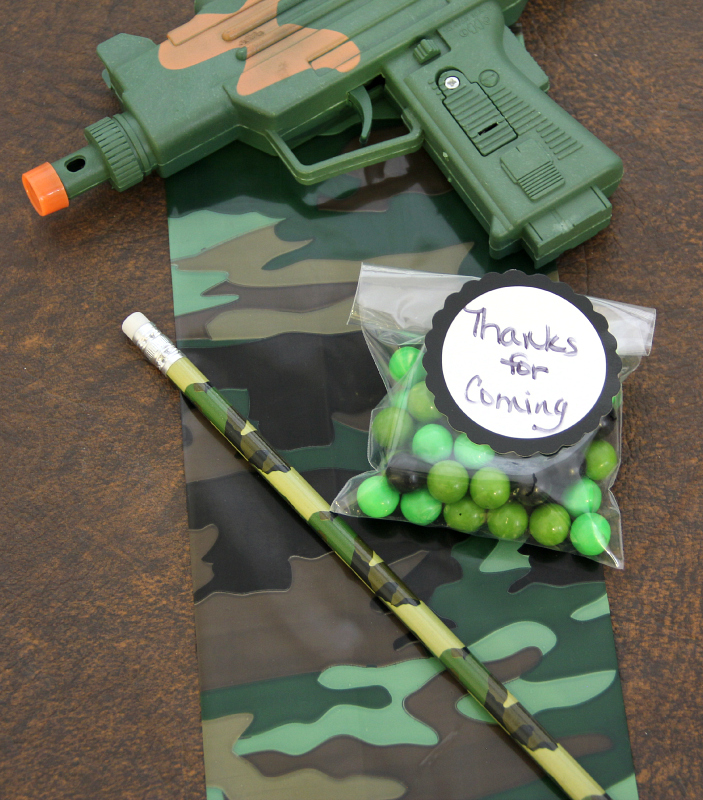 The party favors were super simple with only a camo pencil, gun, and bag of candy. I hand wrote the “Thanks for coming” on a sticker to hold the bags closed. You could certainly add a duck dynasty duck call as well {and see the list below with more goodie bag ideas}. 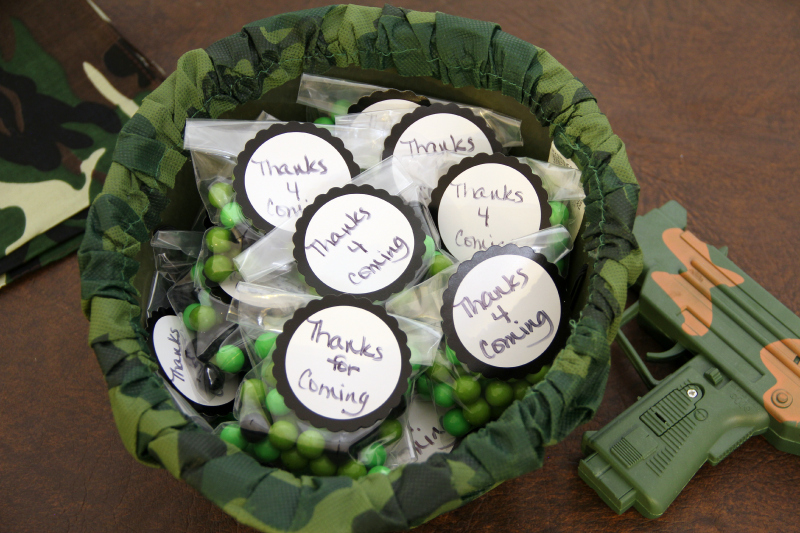 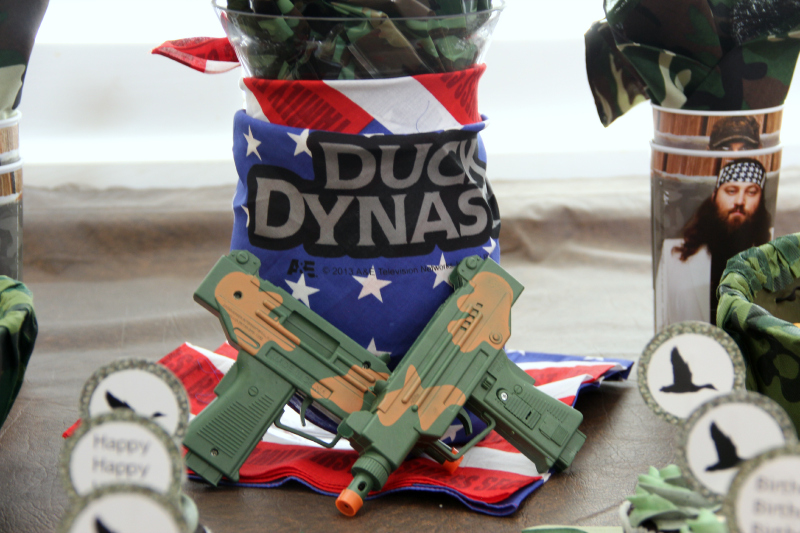 The goodie bags were the centerpiece. They were placed in a large glass vase that was wrapped in a duck dynasty bandanna. I kept the camo theme consistent throughout the party, since they guys in the show are all about their camo. 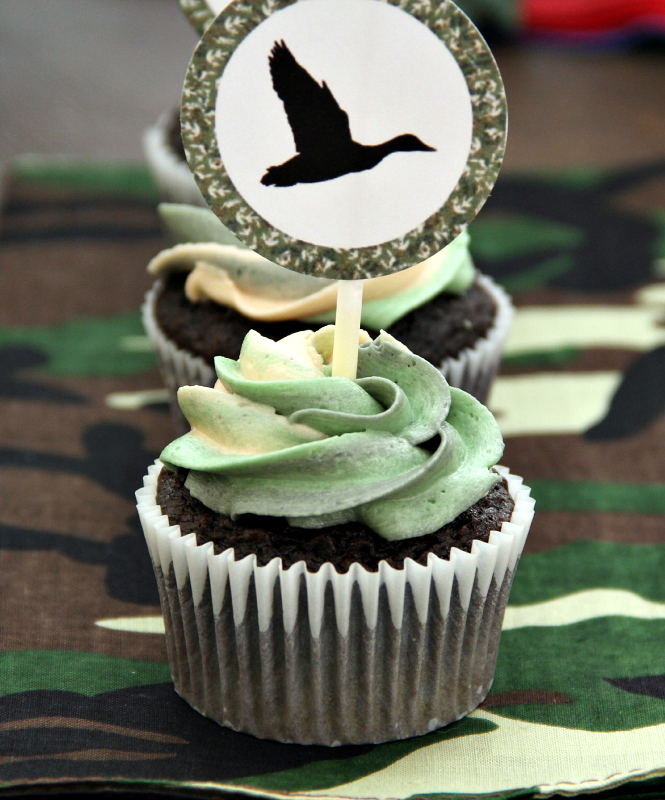 Of course, the highlight of the party were the cupcakes. I made a simple chocolate cake recipe with my favorite white almond buttercream frosting and then decorated with a camo swirl on top and fun duck dynasty inspired cupcake toppers.

Here are the cupcake toppers I created for the party. They were a huge hit. And I promise to share how I made the swirled camo frosting in a separate post in a couple weeks. 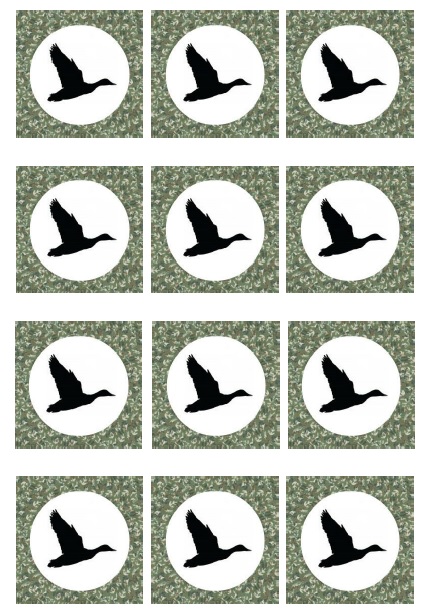 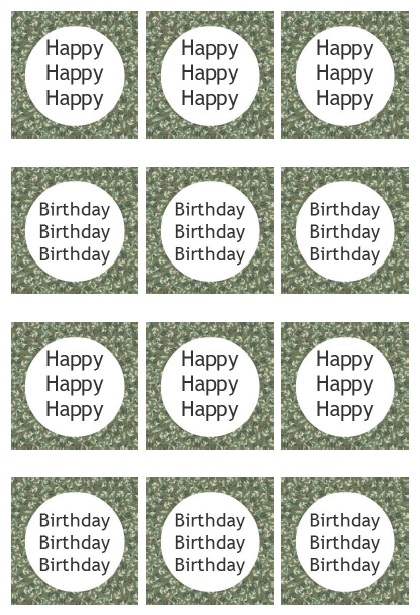 After you download the cupcake toppers, print them with a color printer, and then use a 2 inch circle cutter to cut them out. Attach candy sticks and you have the cutest cupcake toppers for the party.

just pick a few to really make your party pop!

Looking to add some party favors to your celebration? Check out my post about Party Favors on a Budget to help you stay focused and save some money when planning your favors.