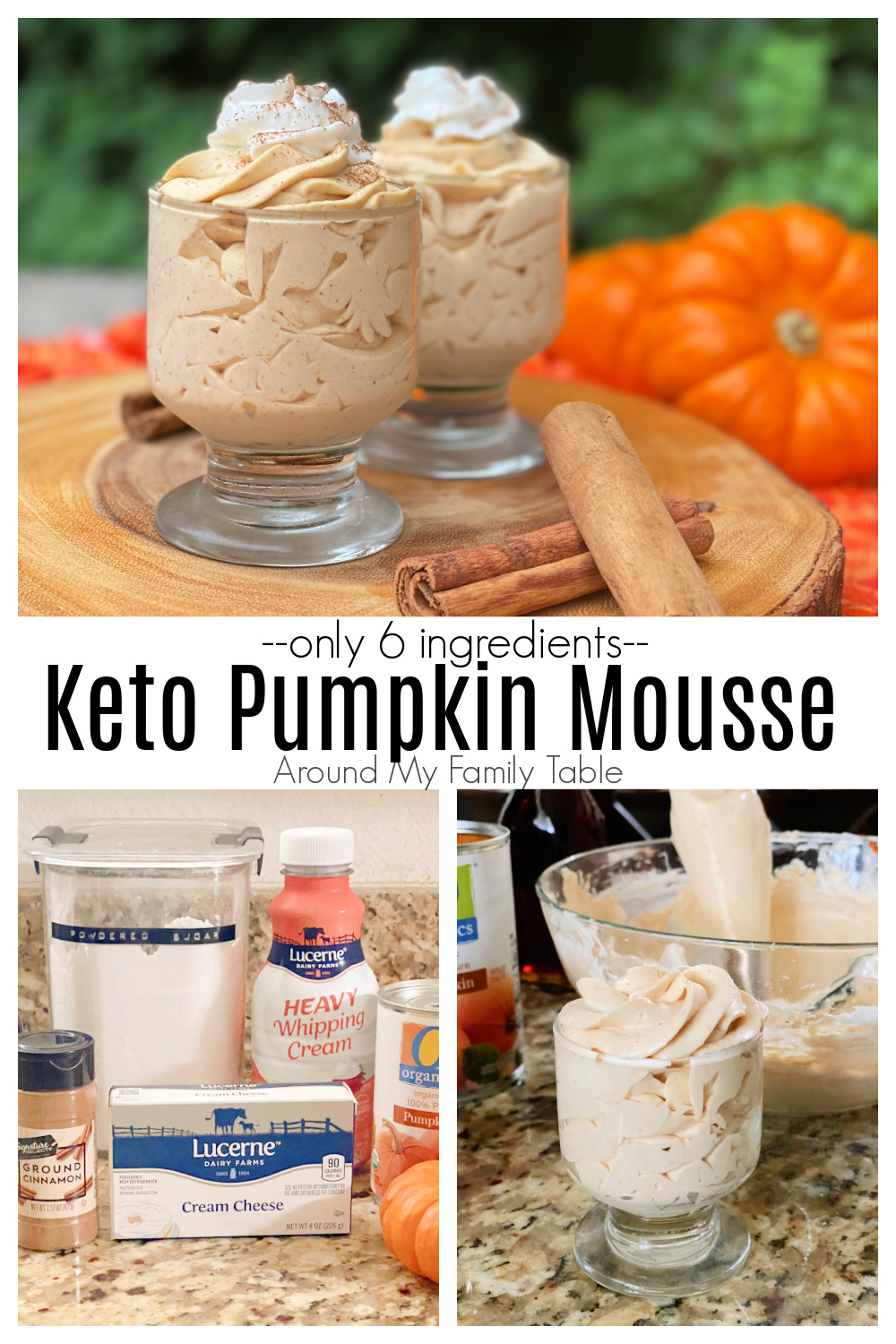 My Keto Pumpkin Mousse has all the fall flavors you are craving. Only 6 ingredients create this light and fluffy fall dessert that you will make all season long.

I love homemade pudding, so it’s no wonder I love homemade mousse too. Both are way easier to make than you think. And the best part is that my keto pumpkin mousse is no bake, no eggs, and without pre-packaged pudding. Just 6 simple ingredients that you might already have at home. These are my favorite types of recipes….using the foods that I already have on hand to create an amazing dessert.

My keto pumpkin mousse with cream cheese is the perfect pumpkin mousse for diabetics as it’s made with an erythritol sweetener (but you can make it with regular powdered sugar too). It’s delicious and works for those following a diabetic, keto, or low carb lifestyle. It’s perfect for my whole family! And even if you have guests that aren’t following one of those diets….they will never know and you’ll be happily enjoy the flavors of fall while sticking to your plan.

How to make keto pumpkin mousse

Don’t let this recipe fool you. A mousse is super easy to make, one of the simplest desserts, and it just sounds fancy.

Basically, whip the heavy cream until stiff peaks form. Then whip the cream cheese and sweetener together until light and fluffy. Mix in the pumpkin puree, cinnamon, and vanilla. Add in part whipped cream. Finally, fold in the remaining whipped cream. Spoon or pipe into small serving bowls. Refrigerate until ready to serve. This keto pumpkin mousse recipe serves 4.

Can pumpkin mousse be made in advance?

Absolutely! Get a jump on dessert for dinner tonight or an upcoming party. This pumpkin mousse can be made up to 5 days in advance and kept in the refrigerator.

Can you freeze pumpkin mousse?

Yes, you can it! It can be frozen for up to 2 months, but the texture would be similar to ice cream once frozen.

💡 Whipped Coconut Cream: Chill can of coconut cream (or coconut milk)in the refrigerator overnight. Don’t tip or shake can. The following day chill bowl and beaters for at least 10 minutes before whipping. Gently open can and remove the top, thickened cream (leaving the liquid behind). Place hardened cream in chilled bowl and beat until creamy, add vanilla and powdered sugar if desired. Continue beating on high until stiff peaks form (but don’t overbeat or it will separate). Use immediately or store in the fridge up to 2 weeks.

A few swaps would be to use cool whip or whipped coconut milk (canned coconut cream) instead of heavy cream. Also adding in some sugar free (or regular) white chocolate chips would be delicious. I like these or these….so good! Of course, these swaps will change the nutrition but would totally work.

In a stand mixer or using a handheld mixer, whip the heavy cream until stiff peaks form.

In a separate bowl, whip the cream cheese and sweetener until light and fluffy using a handheld mixer or stand mixer. Mix in the pumpkin puree, cinnamon, and vanilla. Add ⅓ of the whipped cream and gently fold into the pumpkin mixture.

Refrigerate until ready to serve (up to 5 days). Top with whip cream and a sprinkle of cinnamon, if desired.

As an Amazon Associate and member of other affiliate programs, I earn from qualifying purchases.

« How to Cook the Best Brown Rice
Fall Spice Blends »