Hubbyman’s birthday was this past weekend, so I decided to make up some yummy cupcakes. One of our favorite drinks is a Peppermint Mocha from Dutch Bros, so I wanted to put that into cupcake form. YUM!

The cupcakes start off with a basic boxed mix and the frosting is inspired by Martha Stewart’s 7 Minute Frosting. These cupcakes were gobbled up by everyone….not one was left. Once the cupcakes are frosted, they need to be eaten within several hours; however, you can bake the cupcakes a few days in advance.

I just have to share this…as I was getting this post ready this morning and adding the picture, my 1 yo climbed up on the chair and desk. He was pointing at the cupcakes and saying “Yum” in a cute 18 mo old not-really-talking-yet sort of way AND licking his lips. Apparently, he remembered from the weekend how good they were. 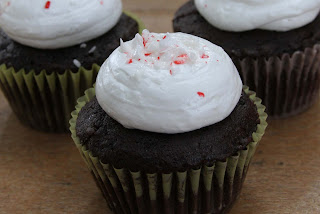 Prepare cupcakes as directed on box. However, replace all the water with strong brewed coffee. Bake as directed. Allow cupcakes to completely cool before filling or frosting.

Once cool and you are ready to frost; fill the center of the cupcakes with a thick chocolate syrup. It’s easiest to do with this with a circle tip and pipping bag (or fill a zip top back and poke a hole in the cupcakes and fill).

Note: Hershey’s Choc Syrup might be too thin. Try making your own (see the link above) or Trader Joe’s choc syrup is really thick.

In a small saucepan, combine 3/4 cup sugar, corn syrup, and 2 tablespoons water. Heat over medium heat, stirring occasionally, until sugar has dissolved. Rub a bit between your fingers to make sure there is no graininess (careful it is really hot). Raise the heat to bring the sugar to a boil. Don’t stir anymore, but wash down sides of pan with a pastry brush dipped in cold water occasionally to prevent the sugar from crystallizing. Continue boiling until a candy thermometer registers 230 degrees about 5 minutes (soft ball stage…in candy-making terms).Meanwhile, in the bowl of an electric mixer fitted with the whisk attachment, whisk egg whites on medium speed until soft peaks form, about 2 1/2 minutes. Gradually add the remaining 2 tablespoons of sugar. Remove the syrup from the heat when the temperature reaches 230 degrees. Pour the syrup in a steady stream down the side of the bowl (to avoid splattering…careful it’s really hot) containing the egg-white mixture, with the mixer on a medium-low speed. Add the peppermint extract (add it slowly and taste…too much and it might resemble a toothpaste flavor).Beat frosting on medium speed until cool, 5 to 10 minutes. The frosting should be thick and shiny. Use immediately.
« Oreo Turkeys
Slow Cooker Potato Chowder »